No poem of the First World War is so famous as ‘In Flanders Fields’.
It was written by John McCrae, a Canadian army doctor stationed at an advanced dressing post situated off the main road from Ypres to Boezinge.
In this well-documented book the Flemish author Herwig Verleyen reveals McCrae’s life story and describes the circumstances that led up to the writing of his celebrated poem. Verleyen also shows how the popularity of the poem spread like a fire.
‘In Flanders Fields’ became a universally recognised symbol of sacrifice and peace. The poppy became the world-wide symbol for all those who died in war. In the second part of the book Verleyen tells about everything that reminds us of John McCrae, both in Flanders and abroad. 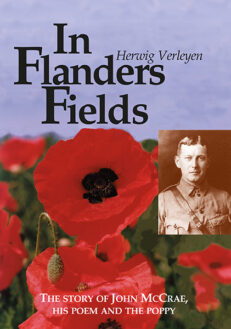