Gas Attack. The Canadians at Ypres in 1915.
In this volume the story of the first Canadians to fight in the Great War is told, starting from mobilization to the grim battlefields of Flanders. On Thursday, April 22nd, 1915 the Canadians would fight their first great battle against the Germans, and would face their secret weapon, poison gas.
By the end of the weekend 2000 Canadians would be dead and 4000 wounded. It was a bloody introduction to the new war. None-the-less the Canadians performed courageously, and fought as no one thought they could. It was a “great day for Canada, Boys.” Asides in the book include; The Nationalities that Served, Technological Slaughter, Some Slang of the Great War and In Flanders Fields. 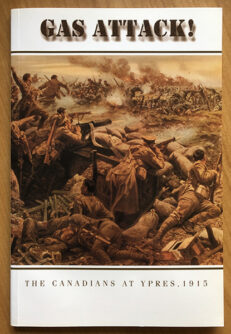