Forgotten victory. The First World War: myths and realities.
The First World War is arguably the most misunderstood event in twentieth-century history. In a radical new interpretation, leading military historian Gary Sheffield argues that while the war was tragic, it was not futile; and, although condemned as ‘lions led by donkeys’, in reality the British citizen army became the most effective fighting force in the world, which in 1918 won the greatest series of battles in British history.
A challenging and controversial book, Forgotten victory is based on twenty years of research and draws on the work of major scholars. Without underestimating the scale of the human tragedy or playing down the disasters, it explodes many myths about the First World War, placing it in its true historical context. 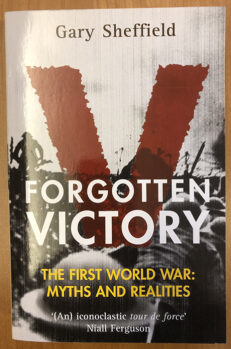